Fusing the poetic Urdu and Kashmiri languages with a cinematic soundscape of dreamy indie-rock, Bangalore based 4-piece Parvaaz were declared “India’s most exciting band” by Rolling Stone magazine in 2018 after a month-long tour of Canada took their music to an appreciative Western audience.

Fast forward 12 months to late 2019 and the band released their hotly-anticipated fourth album, Kun, and tickets began to sell out for the accompanying promotional tour across India. And then, just as the band were ready to hit the road, Covid reared its head and the band were forced into an involuntary 17-month hiatus. Finally, in late 2021, the band announced their return to the stage with the multi-city Full Circle tour, the first tour of its kind in India since the pandemic began.

Mumbai based sound engineer Supratik Das has worked with Parvaaz for the last 4 years as their FOH + Monitor engineer, and when the call came for the Full Circle tour he already had a mixer – or three – in mind. And with the help of Sun Infonet, Allen & Heath’s distributor in India, he was able to fulfil his wishlist. “Depending on the venue, I used a dLive C3500 or C1500 Surface with a CDM48 MixRack, or an Avantis a with GX4816 expander,” explains Das. “While I was slightly more familiar with the dLive than the Avantis, it took me no time to get familiar with the Avantis as well. 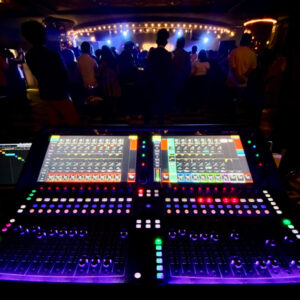 “I decided to use Allen & Heath consoles after a hands-on experience a few months ago for a virtual gig in Mumbai. Rohit Reddy [Senior Product Manager at Sun Infonet] was there to guide me through the boards and I found it very interesting how much these desks can do. It was the perfect choice for me keeping in mind the requirements and baggage restrictions. The fact that the console and the stage rack can both fit in the boot of my car is a huge plus.” With dLive firmware V1.9 released the month before the tour began, Das didn’t hesitate to dive in and utilise some of the new tools on the tour. “Some of the features that I feel gave me an edge are the new RTA features, the two source expanders and all the DEEP compressor emulations,” he says. “They make me feel like I’m sitting in a studio with a whole suite of plugins, but with no latency issues. I also really liked the new NEQ12 [12-band parametric EQ] to really deep-dive into the PA EQ because I am not, personally, a fan of using a graphic on the PA. Another great tool is the Dyn8 processor with its 4 bands of multiband and 4 bands of dynamic EQ., this is one of my favourite features.” 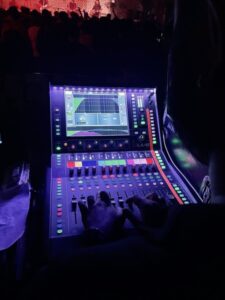 By his own admission, Das is an engineer who likes to work quickly and keep things moving, so the customisable workflow options on both desks were welcomed with open arms – and busy fingers. “A common feature that I like across dLive and Avantis is the ability to use soft keys,” he says. “I am a guy who’s always figuring out the shortest and easiest way to do things. I have maxed out all the softkeys on both the Avantis and dLive and it has made my workflow a lot faster, and the large touch screens on the Avantis are perfect for quick navigation.

“All in all it was great to have the support from the team at Sun Infonet throughout the tour, I definitely had a fantastic experience. I can’t wait to use these mixers for even larger shows and bigger stages!”